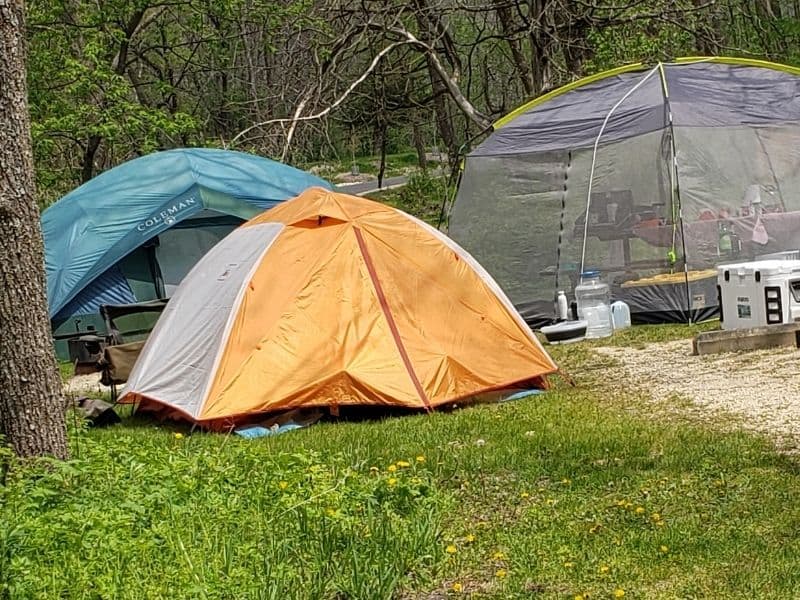 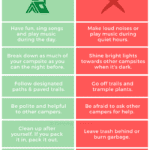 It’s a different world now than it was back in 2019. In some ways it’s a more difficult world, in other ways it’s a simpler world. KOA’s North American Camping Report for 2020 found that 10 million families went camping who had never gone before. That’s a lot of new campers! if you’re one of them, welcome!

If you’ve never been camping, there are a few things you might want to know about the camping scene. The basic rules of “Take only pictures, Leave only footprints” is a very good start, but here are a few more things for you to take into consideration.

Some places will have a ranger or staff member go by on an ATV and remind people about quiet hours. There may be a limit on when you can run your generator (if you have one) due to quiet time.

Don’t be afraid to have silly loud fun during the day, just watch what time you’re starting up cars and doing loud talking or playing loud music.

If you are leaving early in the morning, pack and take down as much as you can the night before. Clinking poles from the screen tent are LOUD at 5am. Save the deep clean of tents and equipment for when you get home.

If you’re nervous about your baby crying and waking up the whole campsite, bring a baby monitor so you can get to them while they’re just fussing and prevent the loud wailing meltdown.

If you need to use headlamps or lights during quiet hours, invest in a head lamp with a red light option. It’ll save your night vision, let you see what you’re doing and not bother your neighbors. We have the red light option because they were required in Havasupai (and we for sure grumbled about the people who didn’t use theirs) and now I won’t camp without one.

One of the most overlooked things is locking and unlocking a car. Many cars honk their horn and flash the lights when being locked and unlocked from the key fob. We were near a family that locked their car every time they shut the door and naturally the kids ended up wanting to take things out and put things back into the car all evening long. The honking and lights flashing got old really quickly. So either leave your car unlocked while you’re at the site (you’re 20 feet away) and lock it once before bed, or use the key.

Occasionally it will be more convenient to walk between or even through campsites to get to bathrooms, water faucets or other trails. Don’t do it.

If no one is at a campsite, meaning it’s empty and there are no tents or anything, it’s fair game to walk through if it leads to an actual path. Once there are tents and camp chairs, don’t cut through.

Stay on actual trails as much as possible so you don’t trample the native plants blazing your own trail. It seems like it’s not going to hurt anything to do it once, but if everyone did it once the plants will be gone. We camped at a state park that had so many random trails in a certain area we couldn’t find the actual trail to the overlook and we walked quite a ways past it. That area is now all roped off so it’s obvious where the real trails are.

Everyone we’ve met in a campsite has been helpful and polite. We’ve seen strangers chase down a rogue tent that was blowing away, everyone running after it thought the one of the others in the group must be the owner. Turns out no one who was chasing it down owned it. The owner was found later, but everyone was willing to help in the moment.

A kind older gentleman and his wife were walking the road in a campground we stayed at, giving out hand-carved wooden cars and trucks to the little kids. My son still has that wooden truck, it’s really cool. Campers are a neat bunch.

So be prepared for people walking by to at least nod hello, if not ask about your tent or other camping equipment. I’ve learned a lot about gear I’ve always wanted to try by asking how other people like it.

If you need help or a piece of equipment, don’t be afraid to ask your neighbors. When camping in Havasupai Daddy Critter found someone with shoe glue to fix his broken sandal and others sought out Momma Critter for her official Nursing advice on a scorpion sting. (My official advice to you all is to not get stung by a scorpion)

One of the rules of basic trail and camping etiquette is to leave a place better than you found it. This means take all of your trash with you. Don’t leave disposable flossers and twist ties laying around, don’t leave garbage in the fire pit (don’t burn garbage at all, but also don’t literally use the firepit as a garbage can as you’re leaving).

Don’t put your campsite garbage in the bathroom garbage and don’t put garbage down the port-o-potties or latrines. There should be a dumpster for you to put your trash in on the way out, use that or bring it all the way home.

If you do need to poop in the woods, follow the rules for Leave no Trace, bury your poop and pack out all toilet paper and wipes.

Don’t wash your dishes in the bathroom sink, and use a minimal amount of soap when you do wash dishes. Literally toss or cascade the water out of your camp sink instead of dumping it all in one spot and causing erosion. Keep soap away from rivers and lakes.

Most campground roads have a very low speed limit, like 5-10 MPH. There are kids and bikes and all kinds of critterz having fun, so slow down and drive the speed limit. Momma Critter actually learned to drive in a state park campground, it was a perfect scenario with low speed limits and one way roads.

Check the rules on motorized scooters, ATVs and dirt bikes. They’re not allowed on all trails or all roads.

Don’t scratch your name into the picnic table or a tree, it’s not cool, it’s vandalism.

Use tree protectors to hang a hammock or clothes line. It doesn’t seem like one hammock will damage a tree (I’ve had people in camping groups call me “needlessly worried”) but after time if a campsite has perfect trees for hammocks, they’ll be too damaged to grow. Help leave the trees in good condition for other campers and avoid a visit from the Lorax.

Keep camp fires in the designated fire pit and put it out when you’re done. Recent years have seen a lot of drought and wildfires, so fire bans are common. Read up on your area or ask at the ranger station about the rules for fires.

Solo stoves are a great portable campfire pit that contain sparks and embers, so they’re less likely to start a wildfire. Check them out!

You should treat the campsite as if it’s a guest room in your friend’s house and you’ll be ok.

I’m Molly Foss, aka Momma Critter. I’ve been camping since I was 9 years old and I always wanted to be Robin Hood and live in the forest when I grew up. I’m excited to share my love of camping with my son as he grows up. My favorite thing to do while camping is roast marshmallows over the fire. 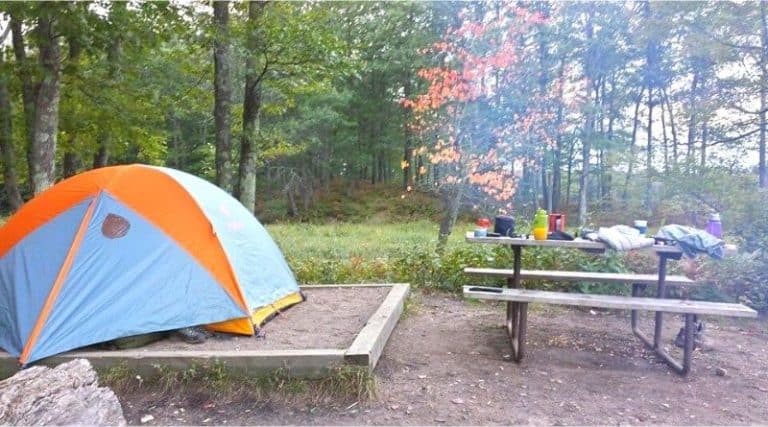 Tips for first time campers! Have an amazing time with your family on your first camping trip by using these helpful hints and tricks! Wondering how to teach kids to poop outside while camping? We have all been there before. You’re camping in the woods, or you’re backpacking in the backcountry, and your kid suddenly HAS TO GO. Leaving human waste or used toilet paper just anywhere isn’t ok. It’s not good for the environment, it’s against leave no…

If you’re going camping, you’ll eventually need to make plans for camping in the rain. You’ll need to know how to stay dry, when to get wet and have plenty of rainy day activities for the kids. Camping in the rain can actually be a lot of fun! Worm collecting, puddle splashing, rainbow watching, blanket… 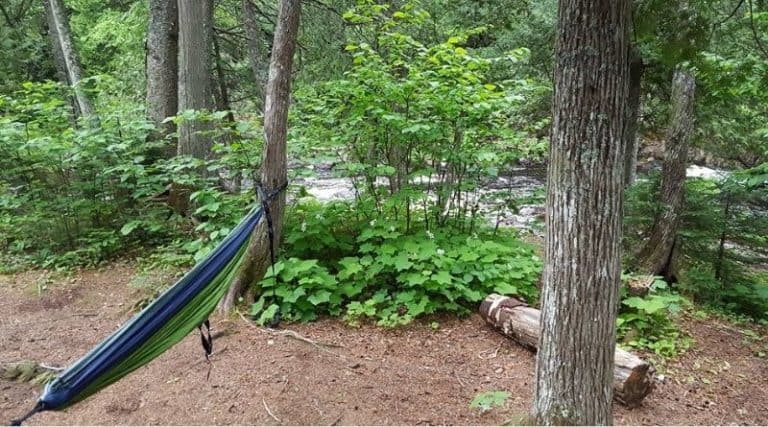 Looking for a different type of vacation this year? Here are the best reasons to choose camping as your next family vacation! Figuring out how to boil water while camping seems easy, but learning to do it efficiently takes practice. Check our tips to become a pro! When you go on a camping trip, you usually expect to get a little dirty. But what do you do when your tent starts to smell a little funky? Can you wash a dirty tent in the washing machine? The short answer is, yes, you technically can. The better answer is no, you shouldn’t. Read…